Can You Learn a Language While You Sleep – Is it Just a Dream?

The average 18-25 year old sleeps between 7-9 hours a night, according to the National Sleep Foundation. Imagine if you could use that time for something else, without ruining your productivity during the day? Sounds awesome right? Well, although you might not be able to get the same amount of effectiveness as you would when learning something during waking hours, it turns out that you can in fact learn during your sleep.

Just how much you can learn though is a different question altogether.

This topic is incredibly interesting because the reality of it is that no one really knows how much you can learn while being asleep. There is evidence to suggest that we can learn during sleep and there are a lot of people claiming that sleep learning works for them. However, a lot of this stuff should probably be taken with a grain of salt. I do not and will not ever recommend buying a “learn it in your sleep” product as those are definitely a con. Don’t fall for that stuff.

I personally have used passive sleep listening as part of my learning strategy but I honestly can’t tell you whether it played a big part, or had absolutely no effect at all. This is due to the fact that I listened to Japanese 24/7. I was being bombarded all day and night by content, that it was impossible for me to remember where I had learnt a word or phrase. It was one glorious mess, I have to say.

I do see the benefits of passive listening while you lie in bed though, but that isn’t necessarily because I believe that language learning while dreaming is possible. The reason that I listen in my sleep is mainly to keep the constant stream of passive listening going. In the beginning stages I often forgot to get my listening on in the mornings and this solved that problem. The time between lying down and falling asleep as well as initially waking up and then getting out of bed, can add up over the months, especially if you really struggle to get out of bed. I personally find that those two time frames are great for some active listening as well, as you have nothing else to really think about.

In my opinion, THAT is where the real benefit comes from. If sleep listening doesn’t have an effect, then what I do might only add up to an extra hour of passive listening per day, but that’s still incredibly valuable in the long-term. That is the main reason that I do sleep listening, and yes the 2nd reason is that I do want to believe that all that extra listening I’m getting while I sleep will have some form off affect, no matter how small, on my Japanese.

Anyway, I’m sure you want more of a solid answer than that so let’s take a look at what the scientists have to say on whether you can learn a foreign language while you sleep. 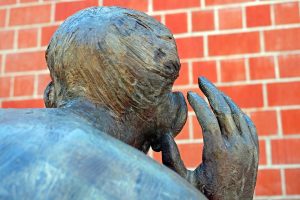 What The Research Says About Learning in Your Sleep

A study done in 2012 by the Weizmann Institute of Science managed to get subjects to associate smells with certain sounds while sleeping stating that, “This acquired behavior persisted throughout the night and into ensuing wake, without later awareness of the learning process. Thus, humans learned new information during sleep.”

This sounds promising but it’s only learning on a sensory level so it’s very hard to tell just how much raw information we can learn during sleep. However, the fact that we can actually learn during sleep is pretty amazing.

One of the more recent and well-known research papers written on this topic was published in the journal Cerebral Cortex by the Swiss National Science Foundation where the researchers tried to find out if they could use NonREM sleep to increase the chances of someone remembering words from a foreign language.

They took two groups of people, all native German speakers, and gave them some Dutch words with the German translations. They were told to learn the words at 10pm but one group was kept awake, while the other made to sleep. Both groups then listened to  audio that contained the words, and others, that they learnt earlier for the next few hours.

Both groups where then awoken at 2 am and given a test to see how many of the dutch words they had learnt.

The researchers found that the group that listened to the words during NonREM sleep did a lot better at recalling the words that they’d heard at 10pm.

So according to this it is much less learning new words but more about remembering and solidifying previously acquired vocabulary.

However, there is also the possibility that the group that was kept awake did worse because they were sleep-deprived.

Based on this it seems that learning new information as well as solidifying previously learnt information are both possible during sleep. Thus, given enough time, I would say that yes, it is possible to learn Japanese, or any language for that matter, in your sleep. BUT just how much time it will take is impossible to tell, there just hasn’t been enough research done on how efficient the process of learning while sleeping is. It could take you more nights than you have on this planet to reach a conversational level.

On saying that Ari in Beijing seems to find the idea promising and ran his own tests to see how much vocab he could retain. According to his video, which I’ve linked below, he managed to remember a lot more after sleep listening. He doesn’t mention about learning any new words though.

I would edge a bet that you would have more luck trying to lucid dream while listening to audio if you are looking at actually learning new material. I’m not a lucid dreamer so I don’t know if this would work, but if you can hear the audio while you dream then there’s a chance that you could learn a lot more vocab too. The difficulty of getting into and also having consistent lucid dreams though is apparently very high so this probably isn’t a viable option for most people. I can also completely understand how a lot of people would think it’s a load of mumbo-jumbo as well. I’m still a bit skeptic myself.

If you are just looking to remember and strengthen the memories of previously learnt words, phrases and patterns then I could see passive sleep listening being of some benefit.

Okay, so it doesn’t seem like listening in your sleep is going to get you fluent in Japanese anytime soon. However, I have a great alternative for you, and it’s this: passive listening. If you are looking into learning a language while sleeping then you are probably already somewhat aware that being able to speak a language requires some form of input first.

This is where passive listening comes in.

If you use passive listening while you are awake, in combination with other strategies, you can get very good at a second language in a relatively short amount of time. Now, it does take A LOT of listening, but that’s the only downside, from there it’s all win-win as you are guaranteed to become able to understand the language you are learning. How do I know? I did it and am now sitting here watching, and fully understanding, Marvel’s The Punisher dubbed in Japanese, and its freaking epic. If you want to be able to actually understand a native speaker then you are going to have to get a lot of listening in anyway, so why not give yourself a head-start by starting today? All you need is some content, a device that can play music and earphones.

Treat it as Supplementary Learning Alongside Other Methods

One thing I will say though is that learning a language takes a lot of time and effort. It’s not something to be taken lightly. Don’t think that if you do nothing but passive sleep listening that one day you might wake up speaking French, it’s just really unlikely to happen. Your best bet is to implement it as part of your learning strategy. I would recommend a large amount of passive and active listening using native content as well as lots of reading of native content. I also advise using a program like Anki to make your studying easier. Another thing to note is that even if sleep listening did work, how are you going to learn to read and write? That’s something that you are only going to be able to do while awake, and it’s something that will take a lot of time to get good at as well. Unfortunately you can’t learn how to write really well just by listening, you can get pretty okay at it though, you have to read a lot to become great at writing in your second language.

So is it possible to learn a language while you sleep?

Well if you do nothing but sleep listening then you’re probably not going to reach fluency anytime soon, but it is possible you could learn a few bits here and there.

However, it’s much more likely that you will reinforce memories of previously learnt material.

So is it worth doing?

Sure, there’s a good chance that it has no real affect at all, but if it doesn’t harm your learning, it can only do, nothing, or good, right? What’s the harm in taking a no risk gamble? I guess a gamble ceases to be a gamble if it’s no-risk but hopefully you see my point. Providing it doesn’t interrupt your sleep, what’s the big deal, right? The worse case scenario: you learn nothing while you sleep, but learn a little bit before and after bed. The best case scenario: it helps you learn and remember thousands of words, phrases and patterns. I see nothing but a win win situation here.

If you would like to find out more about learning Japanese with methods that actually work then click the button below! 🙂

5 Replies to “Is it Possible to Learn a Language While You Sleep?”