In this post I’m going to show you exactly how I do my listening immersion so that you can also get used to fast speaking native speakers.

I’ll show you how I use a very cool nifty little app that a lot of people don’t really know about.

I’ve mentioned it on this site before and it’s really useful for language learners. It has some really nice features that you can use to speed up and get more immersion into the same amount of time that you would normally spend immersing. 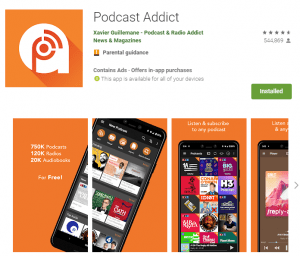 From a quick glance it looks like an ordinary podcast app but it has one main feature that I love about it that makes it so that you can save a lot of time while immersing and therefore get a lot more listening in during your day.

If you want to then I also have a YouTube video on this very topic as well, don’t forget to hit the like button! 🙂

Why I use Podcast Addict

One of the things I was struggling with when trying to find something to use for listening to audio in Japanese was that if you use an ordinary music player app, one that comes with your phone or one that is just designed for music, you’ll find that most of the time they don’t save where your progress when listening to something. If they’re designed for playing music then this makes sense, but it becomes incredibly annoying for listening to long-form content.

When you’re immersing, especially when you’re actively immersing, having a player that saves your progress is a must-have.

You need to be able to go back to where you paused earlier if you close the app, so obviously having an app that can save where you last left off is really useful.

This seems pretty basic stuff but I only mention this because it was surprisingly annoying finding an app that could do this. In the end I figured, “oh I’ll just use the podcast app that I’ve always used.”

I found out that you can just import any music files or audio files of whatever into this app and add it as a separate podcast, which you can see how to do in the screen shots below.

First, from the main podcast home page click the + button in the top right. 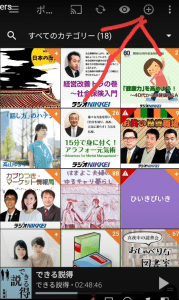 From here select “Virtual” from the menu at the top. 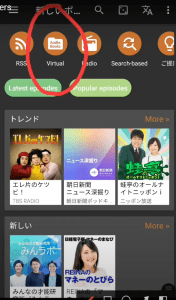 After selecting this option, you will be taking to a screen where you can search for the folder that you have saved your audio to. Simply connect your phone to your PC, find a good location to save it to (I use the default “Music” folder) and then you can select that folder using the instructions above.

It’s very easy to do and then you have all your listening in one separate folder. Something that’s really cool about this is that once you’ve finished listening to a file it marks it as green with an checkmark to say that you’ve listened to it which is also super useful for keeping track of what you have or haven’t listened to.

Again, a lot of other apps have these features and any other app that you can find that can do a similar thing is obviously very useful as well.

One app that a viewer on my YouTube channel has recommended for iOS users is Overcast, which has similar functionality to Podcast Addict. 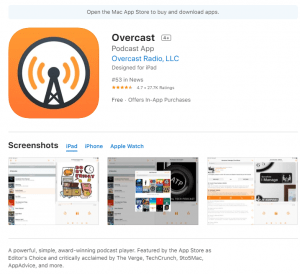 I also use an app called Smart Audiobook Player which I use for passive listening as a separate app, just so I don’t have to worry about my progress at all if say I’m listening at work or while doing housework and I’m not properly focused on the content at hand.

In that case I’ll use Smart Audiobook Player for passive listening as opposed to active listening.

Why Podcast Addict is useful for language learners

Well it’s mainly really for the intermediate and advanced learners out there but it has two major pieces of functionality, that I use all the time, that are incredibly useful for listening practice.

The main benefits from using these two things are:

So what are these two amazing pieces of functionality that Podcast Addict has?

Well the first thing is something that a lot of other applications already do by default so it’s nothing special, but it’s something that I do every day and I think it’s really useful for advanced learners so I’m going to discuss it anyway,

and that is “changing playback speed”.

Now of course this can be used for beginners as well to slowdown the playback speed so that you can get used to normal spoken Japanese at a slower rate, but for more advanced learners getting used to sped up speech or someone who’s speaking really really quickly can be very beneficial.

For example, if you’re in a conversation with a bunch of different people and they’re all trying to butt in and try and speak then it’s very important that you can catch everything that’s being said.

Changing the playback speed in Podcast Addict is super easy. When listening to audio, simply click the 1.0X option (or whatever the current speed is) button at the top of the screen. 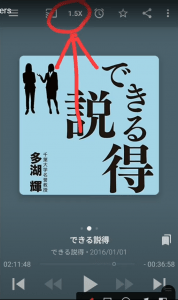 From here a window will appear which will allow you to adjust the playback speed as you like. 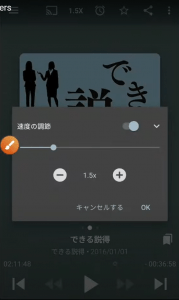 Speeding up my listening material in this way trains my brain to get used to very fast spoken Japanese, very quickly.

But it’s definitely an incredibly powerful tool and it’s something that I do on a daily basis.

So what is this last feature of podcast addict that makes it super useful for language learners?

Well this is something that I’ve mentioned over on this post a few years ago and since then a couple of people have taken it upon themselves to make immersion audio that they use on a daily basis and actually compress (condense) it using Audacity.

Essentially what the feature is, is it’s a function that removes blank spaces from audio files.

There’s two ways of turning this feature on. It should just appear from the menu from the audio player screen as show in the two screenshots below. 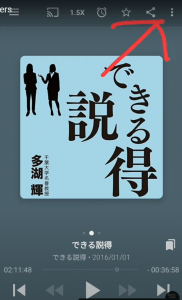 Then just click the option that says 無音スキップ, or “Silence Skipping” in English. 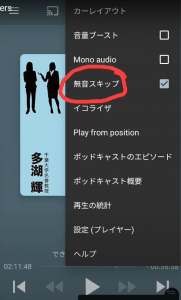 If the option doesn’t appear in this menu for whatever reason then you can also turn it on through the Player Settings as shown below. 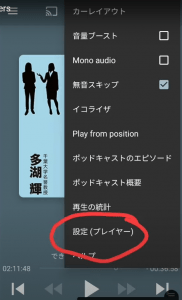 Then go to Audio Player as shown below. 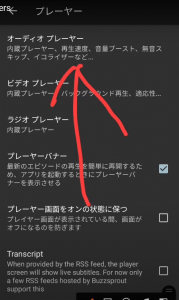 Then from the Audio Player menu, scroll all the way to the bottom select “Silence Skipping” to turn it on.

You can also see how much time you’ve saved from here but I’ve not seen it work for a while now so I’m not sure if this feature is broken or if it’s just not working for me. 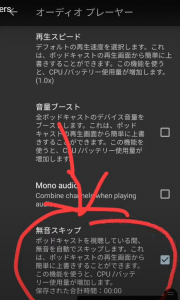 So if you’re listening to a podcast, or an audio book, or a YouTube video that you’ve converted to an mp3, and there’s some dead space, say there’s like 30 seconds of the beginning of the video when no one speaks or says anything. Then podcast addict can, if you turn on this feature, just delete that and remove it from the file as you listen to it.

What you’ll find is if you combine this with changing your playback speed to 2 times speed or 1.5 times speed then you will get this massive bombardment of Japanese speech.

Now if you can get used to this fast paced speech, your listening ability is going to be insane. You’re not going to struggle listening to normal daily conversation in Japanese if you practice this for a few weeks.

Again this is mainly for the advanced learners and it’s definitely not necessary to do nor do I recommend it for the beginners reading this but certainly if you’re listening to files where someone’s a very slow speaker and they have lots of gaps in their speech or it drags on a bit and you think “oh maybe I could you make this a bit more efficient”.

Then certainly pop it into podcast addict, turn on the feature that gets rid of the blank spaces and you’ll find that you’ll be getting much more listening immersion in a one hour time period than you would be normally.

It’s that powerful and so it really does condense down all the listening that you can do to allow you to get way much more listening in, in one hour, or however many hours that you’re doing you’re listening for.

So if you’re someone who wants to get as much listening in as you possibly can, definitely check out podcast addict and have a look at it. I’m not affiliated with them, I’m not sponsored by them this is just a really good app that I’ve been using for years.

Thank you very much for reading, I hope you found it useful!

By Matthew Hawkins
29/07/2021
Massive thanks to Harry and everyone else supporting me on Patreon. You guys are awesome! 🙂
Follow me on Twitter
Support me on Patreon