There are around 200 radicals that make up the main Jōyō Kanji. Knowing the meanings of these can help develop a deeper understanding of Kanji characters.

Do Kanji Radicals Help to Learn the Jōyō Kanji in Japanese?

In my personal experience studying Japanese over the course of 6+ years, yes I would say it definitely contributes to helping you to understand Kanji and learn them faster. My audience on YouTube also appears to agree, with 62% of them agreeing that studying Radicals helped them learn Kanji more easily.

After 1 day of the post being live, 97 people voted. You can find the data in a nice little table down below:

So what does this tell us? Well, it shows that the majority of people who actually studied radicals found it to be helpful in their Kanji studies which are in line with my experience and so I would definitely suggest at least take a look at them before jumping straight into Kanji.

The main benefit of using them is that you’re breaking down a larger problem into smaller chunks. It makes the process of memorizing each character much easier as you can build up a single Kanji characters’ meaning from each radical, as each radical itself also has a meaning.

Studying them can help you, not only learn the most common 2000 Kanji in Japanese, but they also allow you to understand Kanji that you might never have come across before.

Common examples of this are with body parts, as “月”, is often used as a radical in Kanji to mean “flesh”, which makes a lot of sense when you look at the Kanji for liver (肝), stomach (胃) and lungs (肺).

You can see that each of them has the radical, “月” in them, so knowing this fact you can often learn new words to do with the body very easily!

However, this is only part of the reason why they are so beneficial to learning Kanji.

As I discuss in a huge amount of detail on my guide to learning kanji, to learn Kanji quickly it’s important to implement the use of mnemonics.

A mnemonic is simply a memory trick that helps you to keep information stuck into long-term memory, things like songs to remember the alphabet, only for Kanji it’s recommended that you create stories.

How I did this was simple, take each Kanji’s radicals and make a story out of their meanings and relate that story to the Kanji characters’ meaning.

Now if we assume you have learned these two before and then you attempt to learn “江”, meaning “creek”, then we can implement a mnemonic device to make learning creek much easier.

Admittedly this is a pretty easy one that you likely don’t need a convincing story for, but its simplicity helps with this demonstration.

So now that we have our new Kanji that we want to learn, “江”, all we need to do is create a story that includes the meaning from its radicals/primitives as well as the meaning of the Kanji itself.

A simple short story like, “over time water will craft a creek.” will help you link everything together and make it 10x more memorable than simply trying to rote memorize the Kanji for creek.

A huge tip for doing this is to make the stories you create as crazy as possible, use imagery of large objects to make things more memorable as well as scenarios that are just plain impossible in the real world. It all helps engage that part of the mind that stores information to long-term memory.

If you want even more information on how to study Kanji in this way then definitely check out my complete guide on how to do this here: The Ultimate Guide to Remembering the Kanji.

How to Learn Kanji Radicals

There aren’t many resources that are available for learning Kanji radicals. They seem to be an oversight in Japanese courses and textbooks. Because of this issue I decided to create my own flashcards to learn them, all you need for this is the free flashcard app Anki. 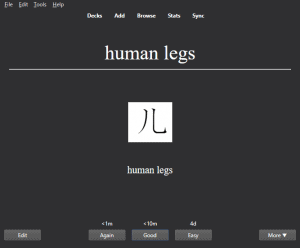 Anki is a super simple flashcard app that makes study super easy and efficient but I won’t go into that here, just know that the algorithms that this simple app uses will make you much more efficient at learning languages.

Once you have Anki simply head over to my Anki deck for Kanji radicals that I made to help people learn Kanji.

After you’ve learned all the radicals in this Anki deck you will be ready to take on the Jōyō Kanji.

You may also want to create your own resource for learning these primitives in which case you will need to know how to type them.

In order to type Kanji Radicals, you will need to use jisho.org‘s “Radicals” option on their search feature. Click the radical you want and you can then copy and paste it. They are organized by stroke count which makes this option easier. You can also use the following Wikipedia page to copy them.

Unfortunately not all the Kanji radicals can be typed out by modern-day computers, hence why the Anki deck I made uses images instead. This is quite annoying but also explains the lack of resources for studying them.

How Long Does it Take to Learn Kanji Radicals?

It really does depend on how many you learn a day, but as there are only around 200 that you need to know it should take less than 2 weeks to learn them all.

If you make use of the Anki deck I created here, then you can ensure that you learn them quickly and keep them in your long-term memory to help you with learning real Kanji characters.

Can You Learn Kanji Without Radicals?

Yes, you can definitely learn Kanji without having to first study their radicals. However, doing so makes the process much harder for you, and in the long run, it’s definitely advisable to learn Kanji Radicals beforehand.

If you don’t do this then you will have to rely upon rote memorization to learn Kanji characters, which is incredibly inefficient as compared with chunking using radicals.

However, there are plenty of courses and resources out there that teach Kanji without introducing the idea of radicals and people still have success with those resources, so it is definitely possible to do if those types of learning suit you.

Thank you very much for reading, I hope you found this useful!

By Matthew Hawkins
12/08/2021
Massive thanks to Harry and everyone else supporting me on Patreon. You guys are awesome! 🙂
Follow me on Twitter
Support me on Patreon